Bird watching or other wildlife viewing and photography is allowed on Fort Drum and        normal access procedures apply.

Fort Drum was featured in an article titled Birding on DoD Lands: Fort Drum, NY in the    July/August 2006 newsletter of the American Birding Association and in an article   entitled A Brief Guide to Birding Fort Drum, New York in the December 2006 issue of     The Kingbird, a quarterly journal of the New York State Ornithological Assocation.

In 2008, Fort Drum began sponsoring a guided birding trip in the Training Area in           conjunction with World Migratory Bird Day. The field trip is usually held the Saturday of     Memorial Day weekend. Pre-registration is required.

Fort Drum has a wide variety of habitats and associated wildlife. Various surveys have been conducted and the information below is the most current related to flora and fauna on Fort Drum (and also included in the latest version of the Integrated Natural Resources Management Plan:

There have been 1,020 plant species recorded on Fort Drum. In general, floristic surveys have been limited and additional species continue to be documented. 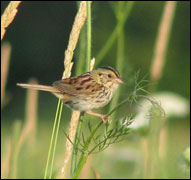 There have been 252 bird species recorded on Fort Drum. A Birds of Fort Drum brochure (2018) is also available. Fort Drum is listed as an Important Bird Area by the New York Audubon Society. See the NYSDEC web site for more information about the birds of New York State.

There have been 45 fish species recorded on Fort Drum. See the NYSDEC web site for more information about the fish of New York State.

In general, there have been no comprehensive invertebrate surveys conducted on Fort Drum except for crayfish and mussels. Dragonfly surveys occurred in 2007-2008 as part of the New York Dragonfly and Damselfly Survey. Pollinator surveys have also been conducted. Many species have been documented opportunistically and lists of insects, millipedes, spiders, crustaceans, and molluscs have been compiled.

To report an interesting or unusual wildlife sighting, please send an email (and a photo if possible) to Raymond.E.Rainbolt.civ@mail.mil.

Currently there are two federally-listed species on Fort Drum: the federally endangered Indiana Bat (Myotis sodalis) and the federally threatened Northern Long-eared Bat (Myotis septentrionalis). The Indiana bat was listed in 1967 and first documented on Fort Drum in 2006. The Northern Long-eared Bat was classified as a threatened species in 2015. Fort Drum works with the US Fish & Wildlife Service to conserve both species. The first 3-year programmatic Biological Assessment and Biological Opinion was completed for 2009-2011. Subsequent biological assessments/opionions have been completed for 2012-2014, 2015-2017, and 2018-2020.

There are 36 known state-listed wildlife species on Fort Drum including 6 endangered, 9 threatened, and 21 species of concern.

Other Places to View Wildlife in New York State

There are numerous places to view and learn about wildlife in New York State. Below are a few suggestions where to view wildlife within a 2-hour drive of Fort Drum:

The Minna Anthony Common Nature Center is one of the largest nature centers in the NYS park system. The nature center is in Wellesley Island State Park in the middle of the St. Lawrence River approximately 30 miles northwest of Fort Drum off of I-81. There are 8 miles of hiking trails, 7 miles of cross country ski trails, and a particularly good place to see bald eagles in the winter months.

Indian Creek Nature Center consists of approximately 320 acres within the Upper and Lower Lakes Wildlife Management Area approximately 65 miles northeast of Fort Drum. There are 7 miles of hiking trails and several good vantage points from which to see waterfowl and other waterbirds on the Lower Lake.

Derby Hill Bird Observatory sits on a bluff overlooking Lake Ontario approximately 60 miles southwest of Fort Drum and is one of the best spring hawk-watching sites in the US.

Carpenter Brook Fish Hatchery raises trout and is open to the public during operating hours in Elbridge, NY approximately 100 miles south of Fort Drum and west of Syracuse.

The Wild Center, the "natural history museum of the Adirondacks" has various exhibits and displays indoors and outdoors. The Wild Center is in Tupper Lake, NY approximately 85 east of Fort Drum's Cantonment Area.

Other suggestions to view wildlife in New York State:

See the NYSDEC web site for a list of other recognized Watchable Wildlife Sites throughout NYS.